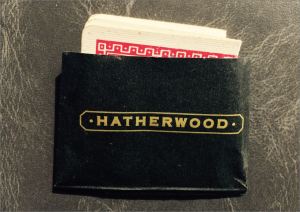 I have to admit that I am a little bit obsessed with CTIL variations. Here’s a new one I came up with only recently. It’s a „Card to After Eight Box“ effect (or substitute any similar product as long as it gives you mint chocolate thins that come in a sleeve each). As you will notice, a folded card fits well into such a sleeve. Unlike the picture above, they should not peek out.

Preparation: Buy a box, open it carefully and eat about half of the thins immediately. Then load each sleeve with a spare folded card. Reseal the box.

Presentation in less than 130 words: Have the box in plain sight on the table. F***e a card from the deck, have it signed and make it seemingly disappear while doing the MF. Present the sealed box and open it. Hold it up pretty high, so no one can peek inside, and riffle along the sleeves with your first finger as you ask a spectator to say stop. Take out a card-filled sleeve, squeeze the opening together and let a spectator hold it, as you distribute some regular thins from the box. Take the sleeve back, pull it a bit open and let the audience see the folded card. Do the Joro Switch as you apparently dump it out, reveal the signed and transposed card and share some more chocolate with your happy audience.