“You are thinking of a gray elephant in Denmark!” 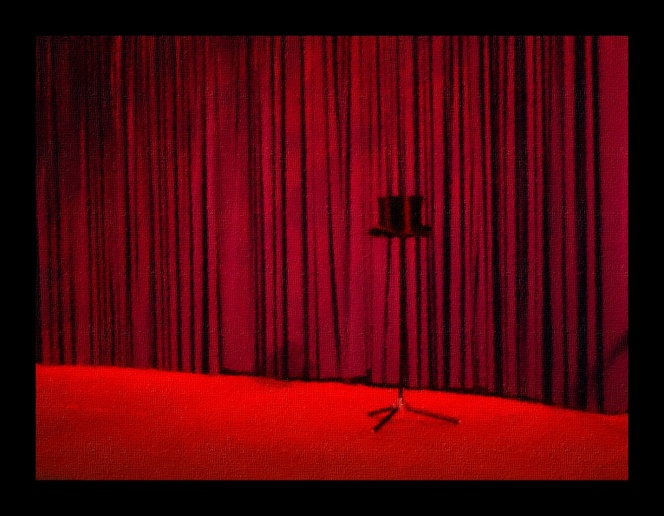 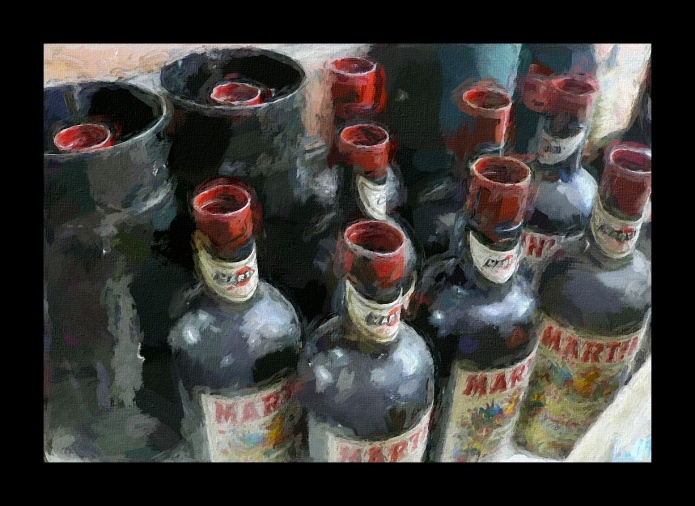 Stay tuned for more pictures, digital and otherwise, from my oeuvre and for bits on magic and other magicians in the arts. Newer entries appear on the bottom of the list.

The finest book on magic in art and art in magic I know is The Art of Deception by Chuck Romano. It is available in PDF format over at www.lybrary.com.

A good starting point can also be found in the September 2007 issue of MAGIC magazine which featured a ten-page article (with many pictues) by Alan Howard on “The Art of Magic Art”.

Cardist Roberto Giobbi was featured on the cover of Genii magazine in November 2009 with a very special portrait created by Ken Knowlton who used pieces of Giobbi’s book covers to recreate a photography by Zakary Belamy. Take a look at it here.

Arguably, Derren Brown is not only today’s best mentalist and TV magician on our planet, he is also a talented painter, as you can see here. He even published a book called Portraits in 2009, featuring many of his early caricatures of actors and other famous people.

If you want to trace the time-honored cups & balls through graphic art history, you cannot go without these two books: Kurt Volkmann‘s The Oldest Deception (translated into English by Henry Hay) and Bob Read‘s The Oldest Trick in the Book, published by Volker Huber.

Fabrini from the magic duo “Vic and Fabrini” has an impressive portfolio of art which is both fabulous and edgy. Enjoy it on his website or at this special tribute page over at Nielsen Magic.

Wittus Witt, professional magician and publisher/editor of the German magazine magische welt, also runs a gallery in Hamburg in which he features exhibitions on magic & art.

A very special art book I came across on Google Books only recently is The Magic Show in 52 Linocuts by Kreg Yingst. Check out his original and funny artwork!

Steve Cohen organized a tribute to Chan Canasta and presented a huge collection of Canasta’s dreamlike paintings at a one-time event at the Waldorf Astoria in New York City.

In a Genii issue I just noticed some interesting artwork on the cover of Daryl‘s DVD series, Master Course, which you can check out here.

Fans of Ricky Jay will find a three-dimensional portrait of him made out of playing cards (which were apparently thrown into a wall) at the Hammer Museum in Los Angeles. It was created by artist Glenn Kaino.

Thomas Cameron is not only a talented young artist, but also a grandson of Roy Walton. His armchair portrait of this titan of card magic was once displayed at The Sutton Gallery in Edinburgh and sold immediately.

Marvelli (Olof Becher, 1932-2008, the leading German illusionist of his time) was once portrayed in a painting by Hanjo Schnug. He is surrounded by famous characters from the world of drama and magic, like Mephisto and Faust, Till Eulenspiegel and The Death. You can see it here.

Here are three great caricatures of the even greater Juan Tamariz: No. 1 by Joan Vizcarra, No. 2 by Pablo Morante, and No. 3 by Ian Baker.

Another talented caricaturist is Juan Luis Rubiales. You can find many great magicians’ portraits here and here. Thank you to Jack Shalom for pointing me into this direction in the accompanying thread to this collection over at the Genii Forum!

At the same time Joe Pecore has thankfully pointed out Dean Alan Carnegie to me, who presents a huge collection of magic paintings on his website.

Another fine artist worth mentioning is Pierre Mayer from France who creates wonderful wooden mechanical magic illusions. Marvel at them here.

Comedian and comedy magician Tommy Cooper (1921-1984) is among the few who has been honored for his achievements with a larger-than-life statue. This one stands 9 feet high and is located in his hometown Caerphilly in Wales.

Young magician and inventor Kevin Schaller is also a painter. You can see some of his works here.

Jonathan Allen is both a magician and a fine artist. Some of his works put magic motifs into political or historical contexts, thus creating bewildering contrast. Check out his pieces “Tragic Magic” and “Untitled Playing Card” there and also have a look at the group exhibition “Magic Show“!

Speaking of playing cards, you should see what characters and animals Shanghai-born artist Tango Gao draws around those unassuming red and black pips! He also runs a great Instagram account named tangosleepless.

Tommervik combines elements of cubism, art deco and avant-garde in his oil paintings. One of his more recents pieces is called “Magician Pulling Rabbit out of Hat”. The rabbit does not look happy.

UK Magician and artist Jay Fortune creates impressive b&w drawings of magic luminaries like Dai Vernon, Ricky Jay and Houdini and sells them for reasonable prices. I recently acquired this fine Dai Vernon portrait from him:

Did you know that magician and movie pioneer Georges Méliès was probably an accomplished painter, too? Find out more about it here.

Magic creator and performer Asi Wind also dabbles in drawing and painting, magicwise and otherwise. His portrait of Max Maven is my current favorite. You can find his works on his Instagram account here.

Antonio Cabral is another magician with a great talent in drawing caricatures, like Derren Brown (see further up). He also had a book published some years ago. Check out his gallery here or see the latest issue of the magische welt magic magazine for some funny portrayals of master magicians!

Vanni Pulé is not only Malta’s foremost magician, but also an avid painter. Have a look at his works here and find an interview there. With his kind permission, here’s his latest piece featuring Hiroki Hara: 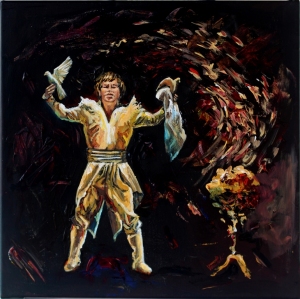 Barbara Giobbi is not only known as the fine illustrator of Roberto Giobbi‘s books, but also involved in the art of Orimoto or Book Origami: 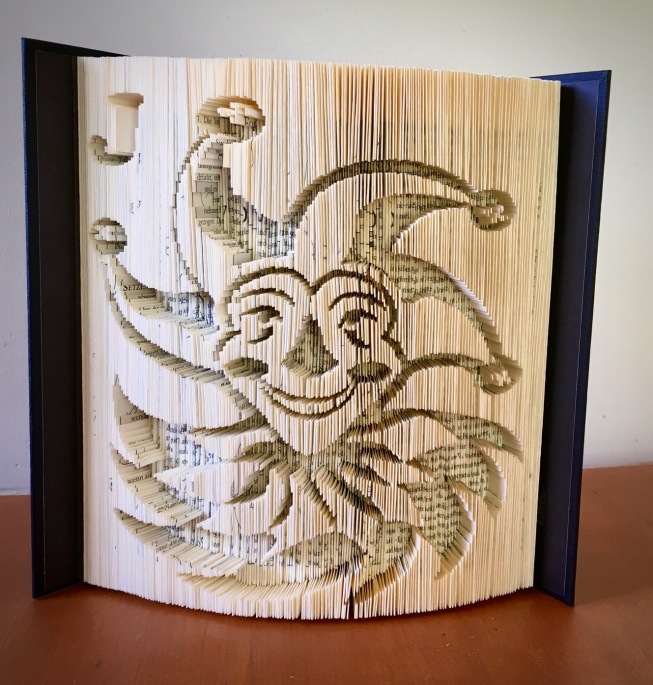 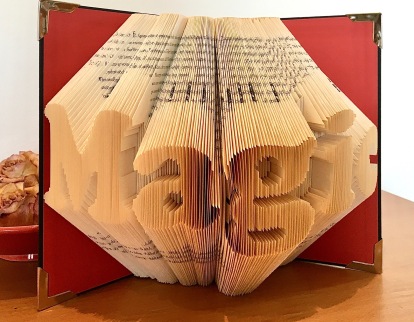 Find out more about it here.

Blake Vogt has designed a cool graphic poster which displays the word ABRACADABRA in a stunning, not-so-obvious way. You can order this piece from Vanishing Inc. while supply lasts.

The Magic of Nature

A selection from my works, unrelated yet somehow also magical, don’t you think?

If you want to see more, consider following me on Instagram. 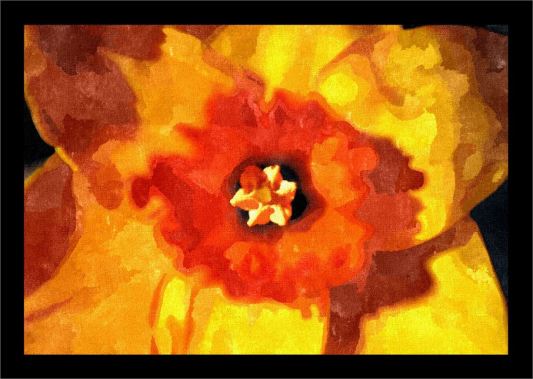