Last year I was fortunate to snatch this lovely art work from fellow magician and painter Jay Fortune. Besides the delicate black ink lines I particularly like the fact that this Dai Vernon rendition was drawn on an original page from an old Genii magazine!

In our ongoing quest to enlighten you about the deep foundations and past masters of our beloved art, I am sharing an interesting piece of recent research from Dr. S. Q. Weezey, a distinguished lecturer and magic aficionado at the Applied University of Shwumbol, which is located in the magical Ben-Son Bool valley in Namibia, Africa. So here are some exciting excerpts!

According to these findings, the hitherto history of sponge ball magic surely needs some heavy editing now. New documents squeezed out of old photoshops (or vice versa?) suggest we have to switch some credits quickly for others.

For example, it seems very likely now that the legendary Larry Hooray was not actively involved in the sponge ball craze, even though he had single-handedly invented card magic, book-writing, memory systems, and this darn internet thing. Neither was the often-quoted Whal Eatley, who ran a Chinese Takeaway in New York City and in fact inadvertently (and painfully) invented the armchopper illusion while chop-chopping vegetable day in, day out.

To set the historical record straight, Kred Faps was likely the first professional magician in Europe to apply standard manipulation techniques to sponge balls, as this early press shot below should amply prove. (Although the photo was later reshot by his new manager, a reformed (?) gambler, who pressed Faps to have the sponges replaced with dice.) 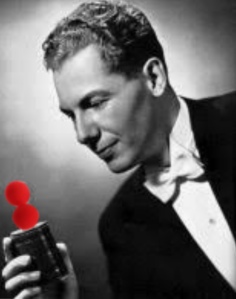 In America, Vai Dernon started his career cutting sponge cubes into balls for a nickel at county fairs and inner city street corners. Then he created his famous “Harlequin Act” around the idea of wearing a sponge ball as a red nose (an idea picked up later by clowns all over the world) that repeatedly vanishes and reappears. He was also fond of doing coin tricks (see below) and card effects with sponges (remember “Twisting the Sponges”), and he never tired of preaching “Use your sponge” and “Squeezing is not magic.” 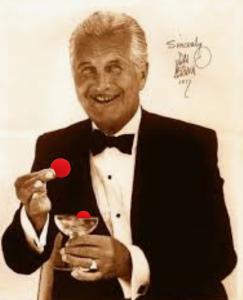 Master illusionist Hug Denning took the sponge ball hype one soft step further when he wrote and directed an entire musical, Spongebound, in the Seventies. Later in his life, he tried to explore the inner peace and healing power of sponge balls (see below) and applied them to transcendental meditation and levitation. He also used them to brush his teeth and occasionally ate them for a low-carb breakfast.

Next in line was young urban hotshot Breff McJide who shook the world of magic with his wild and mythical stage act that combined sponge balls with fire, joss sticks, African drums, and a plastic Samurai sword. He also applied the old art of chapeaugraphy to extra large sponge balls, thus impersonating famous people throughout history and retelling the Old Testament with his fingers (see below) while repeatedly hitting a cymbal with his nose on a dimly lit stage. Later he founded his very own Sponge Mystery School which continues to squeeze money out of students from all over the world.

Artist and scholar Jicky Ray wrestled with his conceptual vision for years before bringing his sensational one man show, “Jicky Ray and His 52 Sponge Assistants” to off-Broadway, which brought him great acclaim. Sadly, his ambitiously started research project on sponge ball magic hustlers at Victorian fairs (see below), in the early oeuvre of Nohann Jepomuk Zofhinser and in the world of gambling was given up for a movie career.

Today’s undisputed master of the trade is Tuan Jamaríz of Spain. Particularly his work on memorized sponge ball magic (see below) still leaves experts and fans baffled and fooled all over the world. For 25 years now he has been working on his two-volume opus magnum, The Spongy Way and The Expert at the Kitchen Sink, the latter one focusing on natural sponge ball tricks performed in the privacy of your home, usually with wet hands. But he also knows some pretty good card tricks.

Unlike other studies, the research paper we are quoting from concludes that Gal Oshman was among the few top magicians in his time who refused to join the globally growing sponge ball craze. Instead, he rather conservatively stuck to performing with coins and cards until his retirement (see below). On a sidenote, he made a fortune by producing and selling rubber saltshakers to magicians (for reasons which still hide in some dark cave of magic history, warranting further research and awaiting discovery).

So there! Next time you perform some sponge ball magic, please squeeze out a little thank you as a tribute to those real giants on whose spongy shoulders we stand, shaking!

Some of you will remember that a few years back Annabel de Vetten ran a shop that featured her graphic magic art: black-white-red pop art renditions of Vernon, Mandrake and other luminaries. (In fact, I dedicated a very early blog entry to her snappy paintings but neglected to buy one, stupid me!) She had also created the cutting-edge designed “Jill Deck” with Card-Shark Christian Schenk back then. Sadly, she seemed to have closed that business when she turned to magic edible art. Upon her own wedding (to a magician, would you have guessed?) she made her own magic wedding cake. But that turn in career was not only a loss. Under the label “Conjuror’s Kitchen” she creates the most magical and spooky sweet stuff I have ever seen.

Look at the above screenshot from her website: Wouldn’t you love to have such a classy cake at your next big celebration, either at home or at the magic club?! And even better, produce it from your dusted-off Square Circle or Super Dove Pan? I certainly would!

Don’t be shy. Her website portrait claims, “If you can eat it, she can warp it into some form you’ve never dreamed of.” As she further states, “Our favourite conversations start with, ‘Now, …this might sound a little weird…’”

Excuse me for a minute, I do need some chocolate now!

It’s not uncommon for magicians to pursue other creative ventures, like painting, shadowgraphy (Dai Vernon‘s main source of income) or edible magic art (Annabel de Vetten). Please have a look in my “Magic Art” section for numerous other bits and links.

As I just noticed on The Davenport Collection website (a fine and growing resource for magic history buffs!), magician and mentalist Peter Warlock was also an anbitious amateur painter. Several examples from the Davenport collection are on display there, including some where he tried his hand on trompe de l’oeil art (which links him with Georges Méliès, see an upcoming post).

Above you see his rendition of Buatier de Kolta performing his unique “Expanding Die” illusion.

There are a lot of books on comedy out there. How to write it; how to stage it; how to perform it. Despite all the rules, it is incredibly hard to do it right. And that is partly because it is so damn hard to define what is funny – and what isn’t.

Let’s narrow the big question down a bit for magic. What makes some props funnier than others? Not for laughing out loud, but for a chuckle or a smile, or to get people interested, because uncommon objects are intriguing and quite often cute.

If I recall correctly from the „Revelations“ tapes, Dai Vernon was fond of saying that a lemon or a potato were a great final load for the Cups & Balls because they were, somehow, inherently funny. A banana is also funny. An apple isn’t. A pear isn’t. A strawberry isn’t. An orange – maybe. A cucumber can be funny once you use it as a magic wand. (That’s my view, not Vernon’s.)

I don’t have a theory to offer either, but I feel that for many objects it has to do with their Gestalt: their size, color and form and the extent to which these deviate from their more common brothers and sisters. Plus, the context in which they are used, appropriately or inappropriately. Some examples will follow.

Matches are tiny, thin and easy to break. A massive wooden match of 15‘‘ length or more, however, is none of that – and it’s funny.

Handcuffs are made of metal, in grey or silver, cold and unappealing. But there are fancy, playful handcuffs around in carnival and novelty stores that are soft and furry, in a bright pink color. Taking them from your pocket or „discovering“ them accidentally somewhere else is funny.

If you announce that you will bring out your time-worn, valuable magic wand and then present a giant pool noodle, a pencil stump or a wooden spoon from your kitchen, that is funny (at least to children).

You get the idea. Now let me invite you to start a tour around your house. Try to discover as many un-ordinary objects as possible. Maybe in the kitchen. In your bathroom. In a closet. In your den. In the shed.

Next step. Consider this:

How could you use these objects in a magic context, be it within a routine you are already doing or as a novelty?

(…and one or two why probably not.) 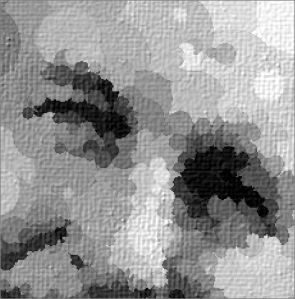 Following the lines of, uhmm, “special thinking” and wild inductive reasoning often displayed in the Erdnase thread over at the Genii Forum, minutes and hours of my own dedicated research and uninformed opining have unearthed that the author of The Expert had, in fact, always been around, hiding in plain sight before us and even among us, as he was no outsider to our community. On the contrary, he was and is one of our most respected practitioners and innovators!

Finally, Erdnase has been found. TEATCT was written “by DAI  VERNON, the Expert Card Handler”. There can be no doubt that he’s our man!

Yes, yes, I know what you’re saying… Officially, Dai Vernon was only born in 1894, and the book appeared in 1902. What a boy wonder! Or maybe he just cheated about his real age. Was he probably about 15 years older than he claimed? Considering his early proficiency with cards, this could be true! Or maybe it was a father and son ploy, elaborately planned and executed over decades (just like some U.S. White House takeovers). And yes, he didn’t choose to be called Dai Vernon until much later on, but, hey, maybe the guy was just planning ahead! All part of the ploy.

Many majishuns are horrible at history. They believe The New Deal was a Vernon concept and the Boston Tea Party a packet trick by Max Maven.

John Carney is a modern Hofzinser.

He is a consummate sleight-of-hand artist.

He is funny, see his Mr. Mysto persona, and he can act – two qualities not inherent to most of us mortal majishuns.

And he is a bit overweight and obviously incapable of changing that (or simply doesn’t care). Either way, this earns him some extra cookies from my tray!

He is also an author, lecturer, creator and teacher of fine magic, as his two sought after books, Carneycopia (1991) and The Book of Secrets: Lessons for Progressive Conjuring (2004), ably demonstrate.

I consider “Secret Philosophy”, his opening chapter from Carneycopia, required reading. By diligently studying this plus his tricks and also his booklet Magic by Design: Study, Practice and Presentation (2009) you will become a better magician. Unfortunately, the latter work is out of print, but you may find other useful material of John Carney on his website here. He also has announced a new book for 2016.

Addendum: I’ve been mulling over a shorter version: Were I not just another man then who incidentally fooled, umm, Houdini? Please advise.

Another Addendum added: If I ever manage to meet Daryl and fool him with a trick or two, I will start advertising myself as “the magicians’ magician’s magician”!