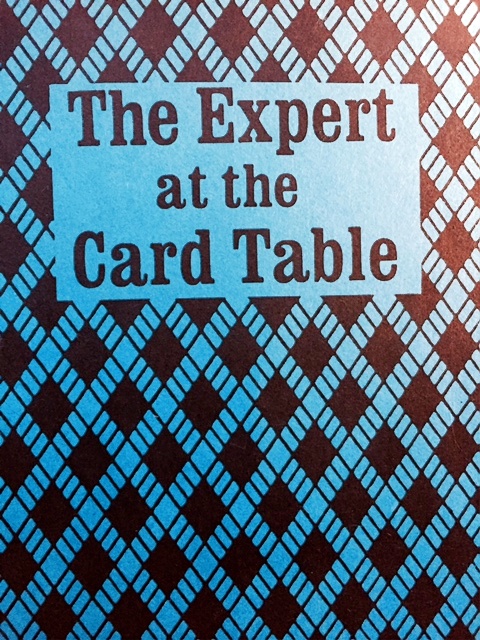 “The Erdnase” (my old spiral-bound edition) 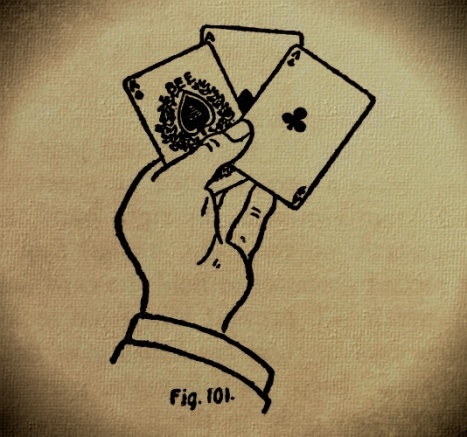 An early quest in Genii Magazine

The longest thread in magic history is on Erdnase

More than 100 years ago, this seminal book on manipulating cards for gamblers and conjurers saw print. It went largely annoticed for several decades. Then the craze about the book, it’s deep insights and revolutionary moves, its writer and his possible background started. But, despite a well-equipped army of dedicated students and researchers, the true identity of S.W. Erdnase, the proclaimed author of “The Expert at the Card Table”, remains one of magic’s best kept secrets.

If you are new to the ride, grab a copy of Erdnase (here‘s an electronic version, and it’s free), get Hurt McDermott’s seminal introductory text, Artifice, Ruse and Erdnase, and follow the longest thread in magic history over at the Genii Forum. You are in for an intellectual treat!

Facts vs. Factoids: What’s in an Anagram?

One of the arguments over Erdnase hovers around the assessment of how convincing or even self-evident hidden meanings in anagrams or text passages actually are. To me, they are factoids, in the sense that they do not really help us identify Erdnase now. They cannot stand their own ground because they only “work” in a given, predetermined context. Only in retrospect, once we have found him for certain, we will thus be able to see to what degree these possible hints were actually deliberately chosen by the author, I’m afraid.

On a general note, language is incredibly versatile – and so is any small group of letters. Thus, a lot of “meaning” can be generated from almost any decent word or name by shifting some letters around, adding or dropping others, etc. In general, this proves nothing but the versatility of words and the alphabet. To illustrate, here are some anagrams I have played with some time ago which you may find amusing (and which hopefully do not offend anybody seriously):

Some are fun, some may “draw sense” or even have a ring of truth in them in relation to the real person behind the name; yet I am sure that all of them are purely accidental (unless their parents convince me otherwise).

As for the word ERDNASE, its six different letters unfortunately rank among the ten most used ones in the English language (ETAOINSHRD) and even among the top eight in German (ENISRATD), allowing for many variations and speculations. Only the “W” is much less common and may thus be a more relevant clue if there actually is a connection between the pseudonym and the man behind it.

How German is “Erdnase”?

Being German, I can attest that Erdnase is a German word and I am sure every German would read or identify it as such. But I would also guess that >90% would neither have heard the word before nor have a clear idea about its meaning. Why? Because it is a widely unfamiliar and obnoxious word. Here’s some proof:

a) I consider myself well-read, but in decades of reading thousands of books and magazines I had never ever encountered the word before discovering our S. W. Erdnase (yup, that’s only n=1).

b) From the many German compound words beginning with Erd- (like Erdäpfel, Erdatmosphäre, Erdgas, Erdnuss, Erdreich, Erdrutsch, Erdumlaufbahn etc.), Erdnase seems to be among the rarest ones (together with its topographical opposite, Erdfall). The word is actually so rare it is not even listed in current editions of the German language bible, Der Duden, and also not in the Knaur.

c) Having run some search queries myself I think Erdnase is probably the noun or name with the fewest hits I have ever gotten in any online search. Yes, there are a few, but even among those I have found some that refer to the topographical “earth nose,” (see below) and some to a cute nickname for dogs and others for kids sticking their noses into the soil and getting dirty in their faces.

d) Much better known German synonyms for a dirt-digging rascal or “mudlark” would be Schmutzfink or Dreckspatz, for example (in literal translation: mud sparrows or dirt finches). They may have been around for hundreds of years; I certainly would have bought these terms as “common”, but not Erdnase.

e) In my view, none of these words would actually qualify as nicknames in the sense of labels permanently applied to a person (like Dwayne “The Rock” Johnson – don’t ask me why he just crossed my mind) and used to identify him or her precisely; their use is clearly context-based, not universal. I could probably imagine a mother calling out “Get out of the mud and come into the house now, you little dirty Erdnase!”, but not “Erdnase, come down for dinner, please!” Thus, it also seems rather unlikely to me that someone would remember a descriptive, contextual and non-personal label like Erdnase or Mudlark as their “personal childhood nickname” and put it to good use for hiding their identity decades later.

If you think the above is a stronger point for the topographical “earth noses” miners may be dealing with, behold. Again, there are very few hits in an online search. I have also checked with several mining dictionaries online (not from 1900 or older, though), and none of them carried this word nor any other special word with “Erd-“. And even though the word Nase (nose) has several meanings in other contexts, the Duden lexicon does not offer one referring to hills or piles of earth. Besides, wouldn’t miners be more concerned with digging holes (= Erdfall) than with piling up the soil?

Speaking of topography, however, it seems possible to me that “S.W. Erdnase” in fact describes a location where the author could have been found at a certain point: somewhere south-western of a prominent “Erdnase” (= hill).

Seek and Ye Shall Find…

Turning toward the famous “Embracing the whole calendar…” triangular section of the title page, any “proof” of authorship taken out of that context becomes even more shaky in my view. The reason: Those nine lines with 41 words and 211 letters include every letter of the alphabet at least once, except for “q” and “z” (so we can at least rule out finding Hofzinser or Tamariz there). Considering this, it is not the least surprising to identify traces of almost any candidate that you’d ever hope (or want) to find there.

Proof: I made up a random list of ten names from the world of magic. My only guidance was whether I thought it would be funny to prove that they were in fact Erdnase. I found all ten of them in the triangular section, including Harry Houdini, Harry Lorayne, Karl Fulves, Jon Racherbaumer and David Copperfield. Both Ed Marlo and Charlier were actually hiding in line one. Seek and ye shall find…

In best Edgar Allan Poe fashion, one could also argue that the real author of TEATCT is hiding in plain sight on the frontispiece. The only real and meaningful name we find there is the one of M.D. Smith, apparently “only” the book’s illustrator. But has his personal background already been checked thoroughly? Besides undoubtedly being an artist, could he have been the card master himself, the “expert card handler” mentioned a few lines up? Was he definitely too young to qualify?

The final line “by M.D. Smith” could certainly be applied to the entire text above, not only to the “drawings from life.” And making up a fancy story about a mysterious man wanting to demonstrate card tricks to him in a cheap cold hotel room could have offered the best misdirection ever, directing away from himself into the great unknown of tall or not so tall men…

Mulling over the famous figure 101 that comes with the trick “The Three Aces” within TEATCT, here is a thought I have enjoyed nurturing for quite some time: What if there was a secret connection between the opening of the book (the original title on the frontispiece, to be precise) and this more or less closing feature of the book, the final drawing?

Unlike the other figures, this one does not only explain the ruse; in fact, it does deceive you, the reader. The display of the aces looks totally regular. Only when you know that there is a subterfuge involved, you will understand that the Ace of Diamonds is not what it claims to be, but something-or someone-else (the Ace of Hearts).

Now the same may be said about the triple of ARTIFICE, RUSE and SUBTERFUGE (= ARS (lat.) = art). I have always wondered why Erdnase used three nouns with roughly the same connotation here: You are being deceived expertly and artfully at the card table. Precision? (Erdnase obviously loved describing things in detail by doubling or tripling words.) PR blurb to make his book sound utterly important? Or simply a clever means of hiding something in the middle, in plain sight? That something might be “RUSE and.”

What is more, in American handwriting, figure I0I can be read forward as well as backwards. A hint at an anagram or at shifting words around?

Finally, the book’s frontpage promises “over one hundred drawings.” The total of 101 figures delivers this promise, but only by the smallest margin. You may not call this cheating, but probably another artful subterfuge…

Pure conjecture, I admit. This could be more convincing if, say, figure 101 were really displayed on the very last page of the book, maybe on page 202, and if the book’s title went more like ART, ARTIFICE and ACES at the Card Table to resemble the three Aces in figure 101 even more closely.

Ten Good Reasons Why This Man Was Erdnase

(…and one or two why probably not.)

Following the lines of, uhmm, “special thinking” and wild inductive reasoning often displayed in the Erdnase thread over at the Genii Forum,  minutes and hours of my own dedicated research and uninformed opining have unearthed that the author of The Expert had, in fact, always been around, hiding in plain sight before us and even among us, as he was no outsider to our community. On the contrary, he was and is one of our most respected practitioners and innovators!

Finally, Erdnase has been found. TEATCT was written “by DAI  VERNON, the Expert Card Handler”. There can be no doubt that he’s our man!

Yes, yes, I know what you’re saying… Officially, Dai Vernon was only born in 1894, and the book appeared in 1902. What a boy wonder! Or maybe he just cheated about his real age. Was he probably about 15 years older than he claimed? Considering his early proficiency with cards, this could be true! Or maybe it was a father and son ploy, elaborately planned and executed over decades (just like some U.S. White House takeovers). And yes, he didn’t choose to be called Dai Vernon until much later on, but, hey, maybe the guy was just planning ahead! All part of the ploy.

To be continued as further exciting research surfaces!